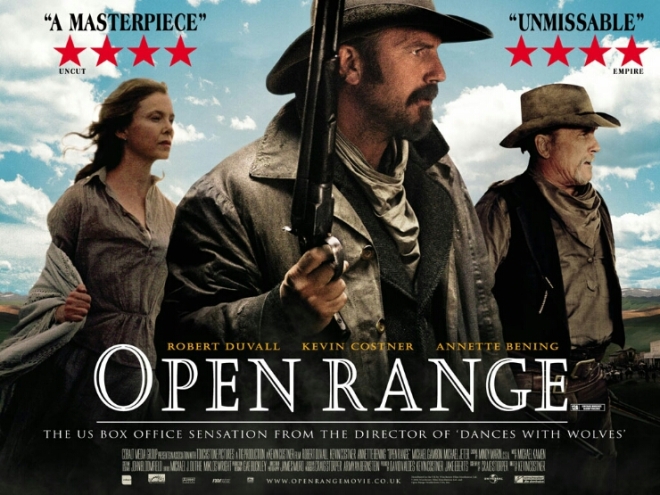 And we’re back! Flicks On ‘Flix has returned and I’m kickstarting this new “season” with a film I cannot believe I haven’t covered yet – Open Range. Directed by and starring Kevin Costner, accompanied by Robert Duvall, Michael Gambon and Annette Benning; this is the film for this of you like me who grew up in an age where Kevin Costner was box office gold, where The Postman was one of the biggest WTF moments of your young life and you wondered would he ever regain his status. Oh yes, he did.

Costner was down and out when he embarked on this adaptation of Lauran Paine’s The Open Range Men. The Postman released in 1997 and from then until 2003 only a supporting turn in the Cuban Missile Crisis drama Thirteen Days had garnered him any merit. The only logical thing to do then was of course to secure a $22,000,000 budget and head off to the wilds of America to shoot a western. Gambles pay off sometimes though and this is certainly one of those times. Costner plays Charley, a Civil War veteran who along with Mose (Abraham Benrubi) and Button (Diego Luna) is working as a hired hand for “Boss” Spearman (Robert Duvall). Charley wishes to put his violent past behind him but upon coming across the town of Harmonville and its corrupt land baron Denton Baxtor (Michael Gambon) the group soon realise that violence follows in even the most unlikely reaches. Baxtor is not fond of open range free grazers encroaching on his land and via his cronies Mose is killed and Button near mortally wounded. From there, Charley is sprung back into action.

It sounds a little trite and more than a little cliché I’ll admit, but the end result is anything but. First of all, Costner enlisted the skills of J. Michael Munro to be his director of photography. Munro had previously worked as a camera operator, primarily steadicam, most notably on one of Costner’s previous directorial efforts Dances With Wolves. The combination of Munro’s keen eagerness to impress in his first solo outing as well as the raw and kinetic energy he brings to some of the more action heavy scenes gives this a visual aesthetic that is immediately familiar yet alternative to any Western before it. The second crucial factor in making this film the standout that it is is the absolutely perfect, to the most delicate of details, casting involved. From the smaller parts such as Mose right up to Spearman, not a single actor feels even remotely out of place. It is Gambon who absolutely steals the show though. He may have left Dublin at the age of five but you’d be hard pressed to tell as he channels all of his Cabra youth to execute a flawless accent as the villainous antagonist. As someone who bemoans the lack of genuine and/or flattering portrayals of Irish citizens in most bigger budget US productions, this was an incredibly welcome surprise (yeah, ok, he’s the snarling moustache twirling villain but hey – we can’t all be good). Gambon alone is worth the watch but as I said above, everyone from top to bottom is just spot on.

Of course anyone who has seen Open Range will tell you, we can’t not talk about the shootout. A true staple of every good Western, Open Range is the first – and last – time to date I saw a shootout unfold onscreen and… well… believed it. Crank the volume, I’ll stay away from spoilers, and watch the carnage of the final twenty minutes unfold. It’s not machismo guns a blazing either, it’s plain old Wild West revenge by bullet. A breathtaking piece of cinema and if I’m honest, I’ve seen the final twenty minutes about ten times more than the rest of the film. It’s that good.

Gun crime is a sensitive subject, particularly in the US in the last 12 months especially. It may seem crass for me to heap praise on a realistic portrayal of gun based combat but within the film it is necessary. Open Range poses the question – can a violent past be outrun? The question runs rife through the film and makes a reprise right at the death. I won’t say any more than that but it’s a scene that resonates for sure.