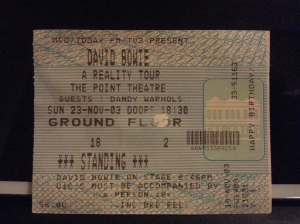 I’ve been to a whole lot of gigs in my life. Until I hit the age of 16 they were mostly my father bringing my brother and I along to the likes of Neil Young, Sting, The Eagles and more, making sure we saw the classics while they were still around (or at least still around and still good!). One exception to this however was David Bowie. Until recently, I’ve never had more anticipation and excitement dwell within me for a gig than this one. My brother, Colin, is the Bowie nut admittedly, but all three we were ecstatic in the build up.

A slight disaster struck in the fact that we had tickets for the first night and a certain gobshite (yes, me) may or may not have been taking part in a school musical on the same night. I pleaded with teachers, tried to back out of the show. No use. The solution was found thanks to the glorious Buy & Sell where we managed to swap for the second night and then proceeded to pray the tickets weren’t bogus. The stories were out from the night before that he had gone down an absolute storm, although in an age before broadband was the norm there was no reading set lists online, no reading of intimate backstage details on message boards from those that were touring with him. Ah those were the days.

On to The Point we went, and for the first and last time in my life I found myself sticking around for the entire support act. That it was The Dandy Warhols certainly helped that one however. They were great and I have also never seen them better. Anyone who remembers the old Point Depot may remember up to the top right of the stage, beside the balcony, there was a sort of thatched wood wall blocking access to the backstage area. We’ll never know for sure but myself and Colin are adamant we could see the silhouette of The Thin White Duke himself peering out from behind the thatch, taking in the thousands here to adore him. Getting one last feel for the place before taking the stage.

Our father had been to see Bowie a few times before, and odd as it sounds, there was a more negative anxiety lingering over us. You see, more so than any other artist, Bowie does have that reputation of happily gigging his current album exclusively and happily leaving out the hits, with two or three dragged up to close the gig as a formality. Whilst I never object to artists wanting to promote their new material, and I tread carefully in saying this, with a career as storied as Bowie’s there’s a lot of shit for all the brilliance. That “Reality” was his current album helped matters greatly as it is probably his best work since the mid nineties, but still, anxiety.

That was quelled somewhat as a stunning animated visual of the band and himself rocking a harmonica jam appeared on screen, and filing out in line they all took the stage. Then came “Rebel, Rebel”, straight onto a hit, good sign. Although in fairness if I had written that song I’d never start a gig with anything else, it was electric and the crowd went ballistic. But this was a new version of the track, the version that appeared on the deluxe copy of the new album. No the lunacy track, after some of the strongest material from “Reality”, was by far “All The Young Dudes”. Never before, and never since, have I seen Colin react to music in the way he did, which was about two shades short of a heart attack.

Bowie informed us that he had a fantastic night the previous night, and he was going bigger and better this time out. At just shy of three hours on stage, he wasn’t kidding. “China Girl”, “The Man Who Sold The World”, “Slip Away”; right through the years it was a Best Of Bowie and then some. But pure magic descended on two occasions. First was the stunning, and I know there’s been a whole lot of adjectives up to this point, rendition of “Under Pressure” with ever present Gail Ann Dorsey more than ably filling in the tragically vacant spot left by Freddie Mercury. Whatever hit was to be expected, this was nearly falling off the bottom of the list.

But the moment of the gig, the moment between Bowie and the crowd and no one else, was of course “Life On Mars”. No matter how stellar the accompaniment, which was fantastic, this was the most tender moment The Point has likely ever hosted. The sheer volume from the crowd as they sang along, in typical live gig fashion of course, to notes they try in vain but never reach anywhere else. I’m out of adjectives, the best you can do is grab the DVD and see it for yourself (the fleeting moment in which I spotted myself over Bowie’s shoulder in the crowd on the clip confirms for me the performance I’m describing is definitely the same on that’s on the DVD!)

“Five Years” and “Ziggy Stardust” closed out proceeding as we were informed “It’s been a f**king pleasure playing for you and that was that. Of course he was to return the next year to headline Oxegen, but his heart scare and subsequent surgery put a halt to that and since then we have only had sporadic live activity from him. A little part of me nearly hopes he never tours again, so special that night was. That said I won’t be thinking twice about getting tickets should the unlikely occur. A truly incredible commander of the stage, one we will never see the likes of again.